TPA is used in diseases that feature blood clots, such as pulmonary embolism, myocardial infarction, and stroke, in a medical treatment called thrombolysis. To be most effective in ischemic stroke, TPA must be administered as early as possible after the onset of symptoms. Protocol guidelines require its use intravenously within the first three hours of the event, after which its detriments may outweigh its benefits. They can either be administered systemically, in the case of acute myocardial infarction, acute ischemic stroke, and most cases of acute massive pulmonary embolism, or administered through an arterial catheter directly to the site of occlusion in the case of peripheral arterial thrombi and thrombi in the proximal deep veins of the leg.[1] The guideline in Ontario, Canada hospitals for ischemic strokes is that TPA must be given within 4.5 hours of the onset of symptoms.

[Citation needed] Because of this, only about 3% of patients qualify for this treatment, since most patients do not seek medical assistance quickly enough.[citation needed] In the United States, the window of administration is 3 hours from onset of symptoms. TPA appears to show benefit not only for large artery occlusions but also for lacunar strokes. Since TPA dissolves blood clots, there is risk of hemorrhage with its use.

Other Products in 'Oncology Drugs' category 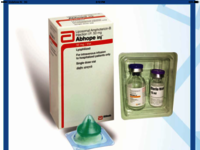